Time is running out for the thousands of people still in the besieged city of Severodonetsk and the odds are truly stacked against them.

We managed to make one of the last round trips before the Ukrainian army closed the last usable bridge in the city due to heavy shelling.

The city came under intense and sustained bombardment over the past few days as the two sides vied for control. There was no respite day or night.

And to us, it looks like the Russian troops are advancing. They are throwing everything they can to take this city – bombings, shelling, missile strikes and signs that they have ground troops not only on the perimeters of the city, but fighting their way outside. inside.

Volunteers who attempted to deliver food and water to residents trapped in their homes by the raging battle came under fire – they believe – from Russian soldiers.

One of them was shot in the arm, but when they ran for cover in nearby apartment houses to which they brought aid, those inside locked their doors and refused them entry. It’s unclear why they did this, but it speaks to the fear, suspicion, and shared loyalties in this city that is rapidly turning into a focal point for the Russian military.

But Ukrainian troops are vastly outnumbered. The Ukrainian president warned up to seven to one in some regions of Donbass.

It feels like only a matter of time before this key city in the Donbass region of Luhansk falls under Russian control. And if so, the fear is that it will be the catalyst for the Russians to move further into Donbass and Donetsk – the second area that makes up the region. 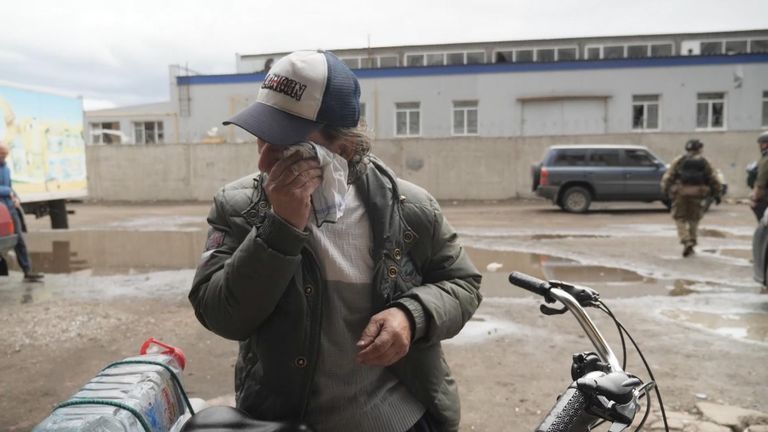 The situation is dire for the people of Severodonetsk and it seems very likely that it is about to get worse.

They have had no electricity, communication or running water for weeks. There is little movement around the city due to the constant shelling. Those still inside the city come out of basements or shelters simply to cook and fetch water.

Evacuations have come to a halt as the routes come under heavy attack and the only operational hospital is cut off by the battle erupting around it. Most of the patients have been withdrawn, but we understand that up to ten may still be there.

The Commander-in-Chief of its Ukrainian Armed Forces – Valerii Zaluzhnyi – urged Western countries to send more deliveries of long-range weapons. “We are in dire need of weapons that will allow us to hit the enemy from a long distance,” he told the Kyiv Independent.

President Zelenskyy has warned that the end of this war will likely see some of its bloodiest battles. We saw one come undone in Severodonetsk.

The next few days and weeks look extremely bleak for the city.