Thousands of Russians are trying to flee the country while they still can, fearing they will be called up and sent to fight in Ukraine. The Russian Defense Ministry claimed that only 300,000 men under the age of 55 with previous military experience were mobilised.

Russian media, however, reported cases where elderly people and men without military training were also called up. Online media Novaya Gazeta Europe even reported that the government planned to recruit up to 1 million men to serve in the armed forces, a claim the Kremlin denied. While rumors of a large mobilization are circulating, many Russians are worried.

“I’m not really scared. They can catch anybody, if they really want to,” Michail Bayankin, 28, said. The warehouse worker in the city of Cherepovets, north of Moscow, told DW that he would still refuse to fight, because he does not understand the purpose of the so-called “special military operation” of the Russia.

“They talk about a sense of duty, but what duty is it? I would understand if our country had been attacked, but we are attacking our neighbour,” he said.

Many Russians share Bayankin’s view and have decided to leave the country — quickly. Those without travel visas travel to neighboring Georgia, Kazakhstan and Mongolia. Locals shared reports on social media of mile-long queues of cars at various border crossings. Those with money fly out of the country, to the United Arab Emirates or Turkey. Many are also heading to Serbia and Finland.

Leaving Russia with a heavy heart

A 34-year-old engineer from the southern city of Krasnodar, who asked to remain anonymous, told DW he had previously served as a Russian contract soldier. This makes him susceptible to being called. Now he has fled to neighboring Georgia.

The engineer said he had long considered leaving Russia, and Wednesday’s announcement of a partial mobilization forced him to press ahead with his plan. “I’m not leaving Russia forever, I love Russia and I will definitely come back one day,” he said from Tbilisi.

Dennis, an online trader from Rostov-on-Don, not far from the border with Ukraine, told DW he never wanted to leave Russia. But when war broke out on February 24, he realized things were going wrong. “We all understood that all of this would lead to no good, despite our faith, things would end up being fine,” he said. 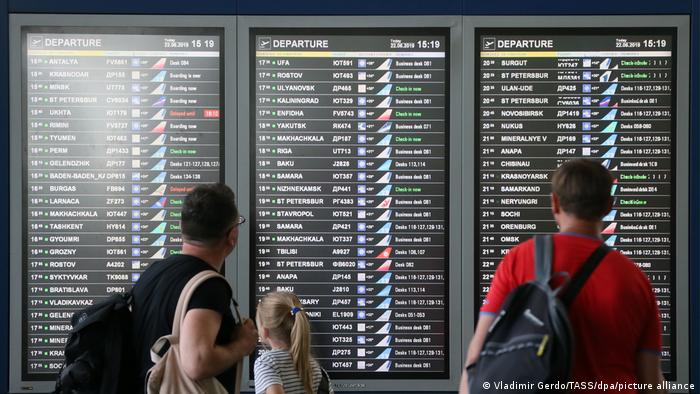 The price of one-way flights from Russia has skyrocketed

Valeri Klepkin also left Russia to avoid fighting in the war. The 43-year-old, who until recently lived in northern Russia, is an engineer by training and previously served in the forces with the Interior Ministry. When war broke out, Klepkin received several requests from his local military district, but he never responded.

When news of the mobilization broke this week, Klepkin immediately packed up and traveled to neighboring Finland, where he has many friends. He knows the language and his grandfather lived there.

“I’m a first class reserve officer, I didn’t want to wait until I had to choose between going to jail or becoming a murderer,” he said.

However, many European states have closed their borders to Russians or restricted entry. Latvian Foreign Minister Edgars Rinkevics made it clear that his country would not accept any Russian conscientious objectors, citing national security concerns.

Similarly, Estonian Prime Minister Kaja Kallas said her country would not allow entry to Russians fleeing their country. Instead, she urged Russian opposition figures to push for regime change in their country.

Lithuania also said it would not automatically offer asylum to Russians fleeing conscription, and neither did the Czech Republic. Finland, meanwhile, is considering banning Russians from transiting the country.

Lev Shlosberg, a veteran of the Russian opposition, criticized these restrictions. Speaking to DW, he said Eastern European governments were giving in to right-wing populist pressure and effectively erecting a new iron curtain. “Sooner or later we will return in peace,” he said. “The bigger the gap between us now, the harder it will be for all of us to come together.”

But Michail Bayankin thinks that won’t happen anytime soon and said the Russian government does not attach importance to human lives. “They tell us we’re heading for the frontline, but they don’t care if we ever come back. To them, we’re just cannon fodder.”

Nor is Valeri Klepkin particularly optimistic about Russia’s foreseeable future. “When civil war broke out in Russia more than 100 years ago, my compatriots could not imagine that totalitarian Soviet rule would persist for 70 years. [Russian President] Putin won’t be in power for that long, but for a few more decades for sure,” he said.

This article has already been published in German