The Chinese and Russian navies staged their first-ever “Maritime Interaction-2021” maritime patrol in western Pacific waters as the two countries sent a total of 10 warships under the Russian Pacific Fleet and six embarked helicopters for the military exercise in the Sea of ​​Japan and the East China Sea between Oct. 17 and 23, the defense ministries of Russia and China said in separate statements on Friday.

The naval cooperation exercises strictly followed international laws and did not enter the sovereign territorial waters of other nations, China’s Defense Ministry said.

“This operation is part of the annual cooperation plan between the Chinese and Russian armed forces and does not target third parties,” he added.

“Russian Navy warships and Chinese naval forces carried out the first patrol in the Western Pacific Ocean from October 17 to 23,” the Russian Defense Ministry said in a statement.

“This joint maritime cruise aims to further develop the comprehensive strategic partnership of Sino-Russian cooperation in the new era, strengthen the joint action capabilities of the two sides and jointly maintain international and regional strategic stability,” China said. in a press release.

The joint military exercise involved tactical naval maneuvers, anti-mine support from the detachments, as well as artillery fire on targets at sea, with the actual use of weapons as warships from the navies of both countries. crossing the Tsugaru Strait separating the main island of Japan and its northern island of Hokkaido. Japan strictly monitored the military actions of Russia and China which experts said were aimed at countering US influence. “The group of ships crossed the Tsugaru Strait for the first time as part of the patrol,” the Russian Defense Ministry said in a statement. 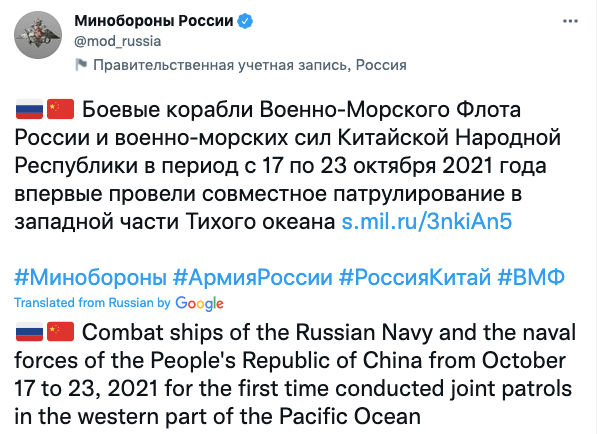 In addition, the Russian ministry added that the “tasks of the patrols were the demonstration of the flags of the Russian and Chinese states, the maintenance of peace and stability in the Asia-Pacific region and the supervision of the subjects of the maritime economic activities of the two countries. . ”

Russia is “bigger threat” than China, says US

The United States had previously said Russia was the source of a greater security threat to Washington and Europe, instead of China. US Under Secretary of Defense for Policy Colin Kahl told Lithuania’s Baltic Military Conference on Friday that Russia may in fact represent the main security challenge and added that the country faces in the military field and “certainly for Europe”. According to the official statement from the US Department of Defense at the Pentagon, the US has emphasized that Russia is an “increasingly assertive adversary.”

Notably, Kahl said China might be, in fact, just “the threat of stimulus.” The US Under Secretary of Defense for Policy said: “Russia erodes transparency and predictability, uses military force to achieve its goals, supports proxy groups to sow chaos and doubt, undermines international order rule-based through cyber and international activities and violates the sovereignty and territorial integrity of its neighbors.