British MP Helen Grant’s son, who served five years in the British Royal Marine Corps commando unit, was seen battling Russian military forces in Ukraine as he led a team of soldiers British and Americans on a mission to destroy an armored vehicle belonging to Moscow.

A 30-year veteran of the Afghan war, Ben Grant, arrived in Ukraine in March and enlisted in the “Foreign Legion”, a foreign military unit of the Territorial Defense Forces of Ukraine. In recent footage, Grant can be heard shouting “shoot it now” and “watch out for the rear blast” as he fires an anti-tank missile at a Russian BTR in a northeast forest and detonates it.

During the 15-hour operation, led by Western Special Forces volunteers from a forest on the front line, Grant and other United States fighters killed at least eight Russian soldiers. British newspaper I later reported that at least 30 Russian soldiers were also killed in a firefight after a team of 13 American and British fighters teamed up with Ukrainian forces to storm a trench.

Grant, who was seen shoulder-aiming a Matador anti-tank missile at the Russian BTR in the videos, about 100 yards away, has been identified as the son of Helen Grant, British Conservative MP for Maidstone and TheWeald. As the fierce firefight ensued between the Foreign Legion soldiers and the Russian troops, another British fighter was heard telling Grant: “He’s facing us” and to “back off”.

Belarusian pro-democracy dissidents who demonstrated against President Alexander Lukashenko’s Soviet-style autocracy were also seen rehearsing military war games near the border with Poland to join the ‘brother nation’ fight from Ukraine. “This whole battalion is made up of people who are fed up with Lukashenko,” Matthew Parker, a former US Army soldier also in Poland, reportedly said. Former US sailor Willy Joseph Cancel, 22, was also recently killed by Russian forces and his body has yet to be found.

“They [Belarusian fighters] hate Russia because of their interference and they see the Ukrainians as their brothers, and they say: ‘Listen, if we help Ukraine and we beat the Russians, we are teaching our own people that you can resist’, a Parker told euronews reporters.

Grant was pictured at Lviv train station with at least seven former British servicemen who had arrived in Kyiv. Speaking to reporters at Lviv train station shortly after arriving, Grant said he made the decision to fight the war in Ukraine after seeing footage of the Russian shelling of a house where a child could be heard screaming .

“I thought I was a father of three, and if it was my kids I know what I would do, I would go fight,” he told the Guardian reporter at the time. “I just want to make it clear, completely on my own, I decided to do it. I didn’t even tell my mum, but that’s the way it is,” he said.

British Armed Forces Minister James Heappey previously warned British soldiers against going to war in Ukraine, threatening to court-martial them. He had cited the risks of escalation as it would bring British nationals into direct confrontation with Russian armed forces. But Grant and a 5-man unit including Americans would be part of the Ukrainian counter-offensive which pushed Russian troops out of previously occupied Kharkiv. They also have two Ukrainian translators. In April, an ex-British soldier Scott Sibley was killed in combat while another went missing.

“I think we must have been spotted by Russian drones ahead of time and they had their lines in place…as we were walking in the mass shooting broke out where you see (in the video) what we we’ve seen,” he told Britain’s Sky News. in a report.

Earlier this month, Grant was also seen helping his comrade, a British fighter injured by a landmine in Kharkiv. He was seen dragging former British Grenadier guard Dean Arthur to safety after a Russian ambush in a northern forest. The British Conservative MP’s son can be heard shouting ‘we have to move now or we’re going to die’ in the footage. As he pulls wounded soldier Arthur through the forest, the ex-Royal Marine is heard saying: ‘You gotta try to walk or we’re gonna die man. Go Deano! Last step, continue! Good man – you moved fast and well there, bro.

“We were walking in single file when the contact happened, Deano was at the end of my team, when he went to his knees…we were shooting, lowering our heads and shooting them. I was terrified but determined to doing my best important goal, which at the time was to get him and my team out of harm’s way,” he later reportedly said. 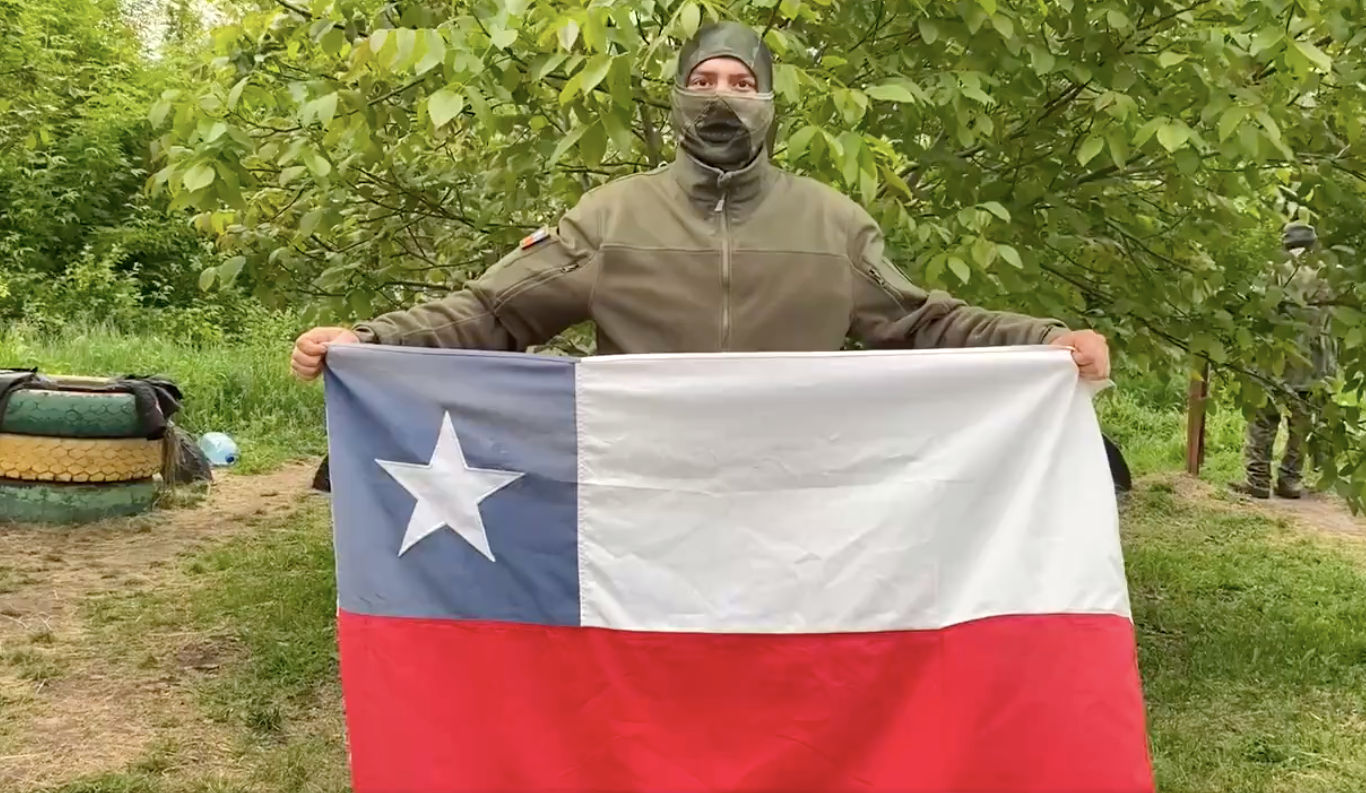 A soldier of the Chilean Foreign Legion. Credit: Twitter/@intermarium24

The Ukrainian army closely monitors the details of the Foreign Legion unit, but it seems that at least 3% of the Foreign Legion personnel are women. The Kremlin has accused Ukraine of hiring “mercenaries,” but Ukraine has a legalization process that “formally integrates” the International Defense Legion into the Ukrainian Armed Forces, which doesn’t make them ” mercenaries” within the meaning of Article 47(2) of the International War Convention. Foreign legionnaires are paid no more than Ukrainian soldiers.